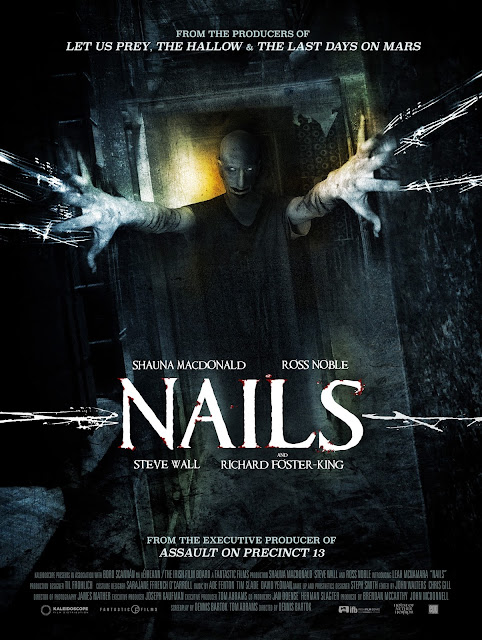 Super-fit track coach Dana Milgrom’s early morning jog is rudely interrupted by a near fatal run-in with a car which leaves her almost completely paralysed. Trapped inside her own body, with her speech severely affected, Dana communicates through a voice synthesised computer keyboard. Staring at the prospect of a lengthy recovery process in a (very) rundown rehabilitation hospital, Dana’s physical vulnerabilities are about to be heightened by a supernatural inhabitant of the hospital. A shadowy figure with long, sharp, finger nails...

Despite a strong committed performance by Shauna (THE DESCENT) Macdonald as the recovering patient trapped by her injuries, the initially promising basic premise never develops into anything more resonant than a couple of jump-scares and some truly clunky dialogue and exposition. Ross Noble is largely wasted as the sympathetic and seemingly only full-time employed nurse in the hospital. Not since HALLOWEEN II (1981) has there been such an under-staffed and under-lit hospital setting. (Frankly, given its sparse resources, I was surprised there was even Wi-Fi available for Dana to conduct the obligatory historical-news-clipping-revelation on her MacBook!)

Narrated by the resident shrink ‘Dr Stengel’ with such a deadened one note delivery you wonder whether he’d previously performed a self-lobotomy, the back-story to ‘Nails’ reads better than it sounds or translates on screen. (It’s creepy, albeit highly implausible – hence why it may work better on the printed page).

‘Nails’ himself appears to have Freddy Krueger-like dream aspirations - albeit preferring to skip manicures instead of threat-enhancing finger knives. Sadly, without recourse to witty pun-laden one-liners, he is somewhat limited to dramatically opening supply cupboard doors, scraping Shauna MacDonald’s paralysed bedsore legs, and scratching out an ominous message on her bare tummy.

The introduction of surveillance cameras half-way through the film seemed at first to suggest a visual detour into PARANORMAL ACTIVITY territory, (the film’s working title was ‘P.O.V’) but it’s not tellingly utilised apart from a clumsy means to emphasise a marital sub-plot which doesn’t need highlighting.

NAILS had potential, but for me it rather disappointingly failed to scratch more than the surface of its terror intentions, and despite a surprisingly bleak finale, remained largely bedbound.
**(out of 5*)

This review was originally published on the FRIGHTFEST website.
Posted by Paul Worts at 09:21

I seemed to have spent most of my formative years in the darkened auditoriums of fleapits and picture palaces. Interviews and reviews - with an emphasis on the darkside and the horror genre.